Voices of the Himalaya > Seke

a Tamangic language of Nepal 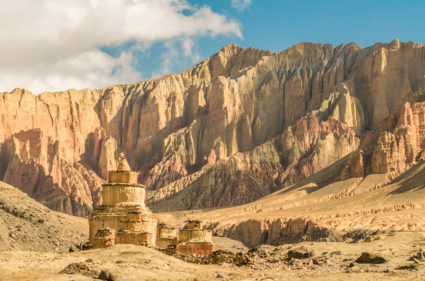 One of over 100 indigenous languages of Nepal, Seke is mainly spoken in Yulinga, ‘the five villages’ of Chuksang, Chaile, Gyakar, Tangbe, and Tetang, in the Upper Mustang district of highland Nepal. There are also many speakers in the nearby town of Jomsom and the larger cities of Pokhara and the national capital of Kathmandu (sometimes on a seasonal basis), and in diaspora centers such as New York City. The language database Ethnologue estimates the number of Seke speakers at around 700, but the real number may be significantly lower as many younger speakers, in particular, have migrated out of the area seeking work and are shifting to Nepali (and in some cases Loke/Baragaon, Tibetan, and English).

Historically, the region — sometimes referred to in the literature as Shöyul—has maintained a degree of both isolation and unity, despite being surrounded by speakers of Loke/Baragaon, which is only distantly related to Seke (Ramble 2008). There is limited evidence from surrounding place names and other residual evidence that suggests Seke was once spoken in a larger area beyond the five villages. Seke speakers often refer to themselves by the village their family is from: someone from Tangbe may use the term Tangbe-ten, someone from Chuksang may use the term Chuksang-ge, and so on.

The three reported dialects of Seke — Tangbe, Tetang, and Chuksang (including Chaile and Gyakar) — have some substantial differences and are said to have varying degrees of mutual intelligibility.

Seke is classified within the Tamangic branch of the Sino-Tibetan language family, and is thus related to the Tamang, Gurung, Thakali, and Chantyal languages. (Seke has sometimes classified, due to resemblances, as a dialect of Thakali.) Because the region where Seke is spoken bridges Nepal and Tibet and Seke speakers live surrounded by Mustangi people, Seke seems to have had more contact with Tibetan languages than the other Tamangic languages.

Furthermore, like other minority languages of the region, Seke has long been in contact with the Indo-Aryan language Nepali, which is Nepal’s official language and is presently used in village schools. Due to this contact — which has taken place largely over the last two centuries and increasingly in recent years — as well as socio-economic pressures, the vast majority of Seke speakers are now also fluent in, and shifting to Nepali. Many in this highly mulitlingual region also speak Tibetan, and older Seke speakers are likewise very familiar with neighboring Loke/Baragaon.

In recent years, Seke has been retreating in the face of Nepali, which (as the country’s official language) is presently considered crucial to educational and employment opportunities outside of the villages. Over the last few decades, difficult conditions at home and job prospects elsewhere have brought Seke speakers to Pokhara, Kathmandu, and New York, among other cities, in increasing numbers. This domestic and international out-migration from the Seke-speaking villages has weakened intergenerational transmission, as has the tendency of younger generations to favor Nepali and English instead. There is currently little in the way of media, education, or other materials in the language.

See the Glottolog entry on Seke

New York City is now home to a significant Seke population, including over 100 people from Chuksang and Chele, as well as the other villages. Most of the community lives in the Ditmas Park area of Brooklyn near Cortelyou Road, where Baragaon speakers from Lower Mustang also live, or within the larger Himalayan community in Queens around Jackson Heights. Like other Himalayan communities, Seke speakers are well organized with an active samaj (community organization) and large annual gatherings around July 4 and New Year’s, and they maintain close contact with relatives back in Nepal.

ELA’s work on Seke began as a linguistic field methods class taught by ELA Co-Director Ross Perlin at Columbia University in 2018, as students worked extensively with speaker Rasmina Gurung on outlining Seke’s phonology and grammar. Students established the core lexicon as well as a small corpus of texts and stories. Student projects included explorations of various grammatical markers and work on Seke folktales and childrens’ books. Following the class, the project moved to ELA, continuing to focus on the Chuksang dialect spoken by Gurung and by many in the New York community.

In summer 2019, on a small documentation grant from the Endangered Languages Documentation Programme, Gurung, Perlin, and videographer Nicole Galpern undertook field research in four of the five Seke-speaking towns. The resulting small corpus of material contains over 10 hours of edited high-quality video recordings of a dozen speakers, which is currently being transcribed and translated. Future research outcomes include a larger corpus of stories and materials for the community, a small dictionary, and a grammar sketch.