NYC language maps available for a $50 donation, or both the NYC map and an ELA t-shirt for $65.
Donate via Facebook or Paypal.

The New York metropolitan area is the most linguistically diverse urban center in the world, probably in the history of the world.

Based on a decade of work, ELA has mapped some 650 languages and dialects to over 1000 significant sites around the metropolitan area, including neighborhoods, community institutions, restaurants, and other locations where there is, or was, at least one speaker. We believe this is the first detailed linguist-produced map of the city. We released the map in December 2019 — covered in Time Out, Gothamist, and elsewhere, and noted in the New York Times — to coincide with the UN-delcared International Year of Indigenous Languages and the lead-up to the critical U.S. 2020 census. We’ve been making fixes and updates as we get them — and we’ll be doing events throughout 2020 to launch the map.

The map is committed to representing many of the smaller, minority, and Indigenous languages that are primarily oral and have neither public visibility nor official support. It represents ELA’s ongoing effort to draw on all available sources, including thousands of interviews and discussions, to tell the continuing story of the city’s many languages and cultures. The patterns it reveals — the clustering of West African languages in Harlem and the Bronx, a microcosm of the former Soviet Union in south Brooklyn, the multifaceted Asian-language diversity of Queens, to name a few — only hint at the linguistic complexity of a city where a single building or block can host speakers of dozens of languages from across the globe.

A freely available interactive digital map is in the works, in partnership with the University of British Columbia and with support from the Peter Wall Institute for Advanced Studies.

See below for details on how to obtain a map and support ELA’s work. 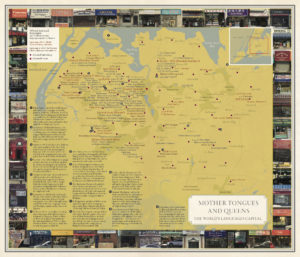 There are three ways to donate and receive the NYC print map — click the Donate button on our Facebook page, donate via Paypal, or send a check made out to Endangered Language Alliance and sent to 3 W 18th St, 6th Fl, NY NY 10011.

Please send your mailing address to info@elalliance.org to receive your map. *Add $20 for shipping outside the US*

If you donate $65, you’ll get the map plus an ELA t-shirt showing I Love NY in all the possible sentence orders in the languages of the world. Just let us know your size!

The Impact of COVID-19 on NYC’s Multilingual Communities

Since late March, New York City has been the global epicenter of the COVID-19/coronavirus pandemic, with more than 170,000 confirmed cases and over 18,000 confirmed deaths as of early May. Nearly every New Yorker has been affected, but the effects have not been evenly distributed. While there is emerging evidence in city data of serious disparities by race, it is also becoming clear, as this map indicates, that multilingual immigrant communities have been among the hardest hit.

This map combines the number of confirmed COVID-19 cases per 1,000 people by ZIP Code (as of May 5) from the NYC Department of Health with the Endangered Language Alliance’s recently released NYC Language Map, which emphasizes linguistic diversity by representing over 600 languages at approximately 1000 significant sites across the city, based on years of collaboration and data-gathering with the city’s language communities. The total number of COVID-19 tests administered per capita by ZIP Code, using the same city dataset, was also mapped for reference.

Despite significant nuances and challenges — such as how to represent languages (especially the more widely-spoken) at individual locations, major variation in population per ZIP Code, different levels of testing for COVID-19 — some overall patterns are clear:

These patterns are confirmed in stories from the communities themselves. Immigrant workers on the frontlines, such as essential care workers, food workers, and transit workers are at greater risk. Disparities around housing, income, health, and immigration status also play a role. A lack of timely, widely disseminated information in community languages, despite efforts, is another critical factor. Language is just one important indicator — note, for example, the affluent multilingual cluster around Manhattan’s United Nations with relatively fewer cases.

These maps were produced by the Mapping Linguistic Diversity partnership, bringing together the Endangered Language Alliance and researchers at the University of British Columbia and Dartmouth College, with support from the Peter Wall Institute for Advanced Studies, Dartmouth College Office of the Provost – Spark Initiative, and the Dartmouth Department of Anthropology – Claire Garber Goodman Fund. Media contact: info@elalliance.org