a Munda language of Bangladesh and India 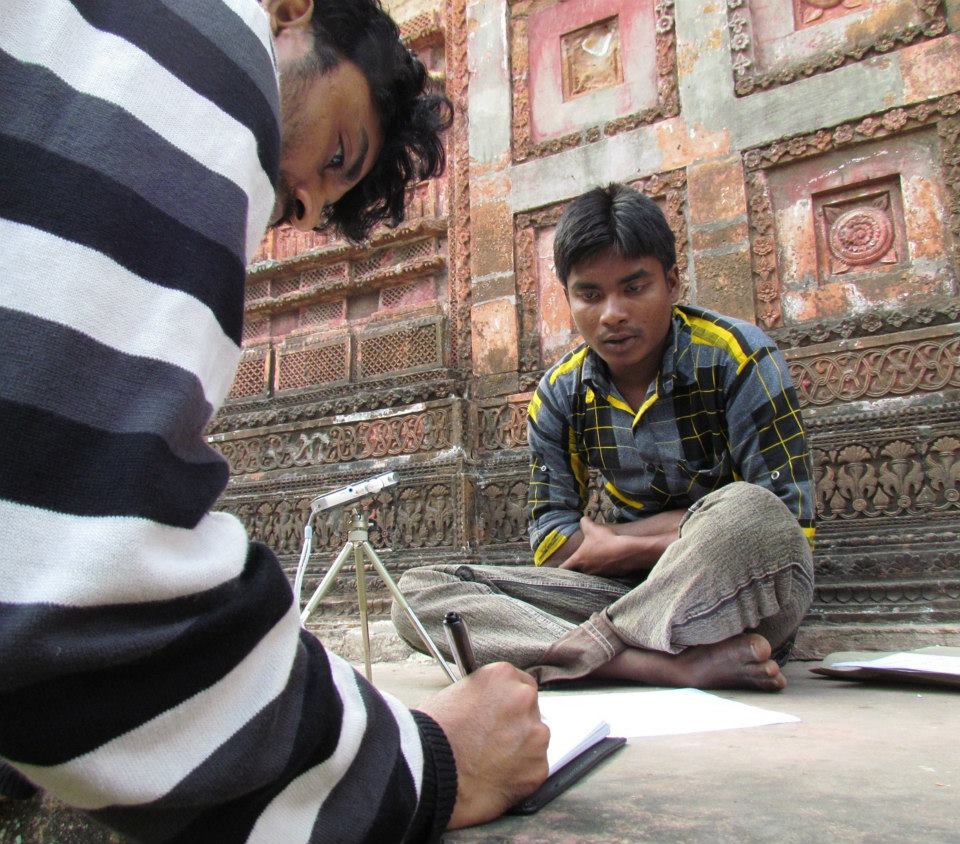 Koda (or Koɖa) is an endangered language of the Munda family, spoken in western Bangladesh and India. In Bangladesh, Kodas live in Puthia, Mohonpur, and Mundumala areas of Rajshahi. In India, Kodas live in Nagpure Chutia, an area located in West Bengal. Estimates of the number of speakers vary widely. According to the census of 2005, cited in Ethnologue (18th ed., 2015), the number of Koɖa speakers in Bangladesh is around 1300. Kim et al. (2010, p. 18) suggest that the total number of Koɖa in Bangladesh would be somewhere in-between 1000 and 1500. According to the estimation of the speakers that ELA researcher Ahmed Shamim worked with, around 1400 hundred Koɖas live in Bangladesh. Bangladeshi Koɖas live in five villages of Rajshahi district: Krishnapur, Kundang, Belna Jhalpukur, Mushmoil and Nounagar. Another estimate, presumably looking at Koda self-identification rather than number of speakers, is 25,000 (van Driem 2007).

While the Koɖa population is growing in Bangladesh, their language is being transmitted at increasingly lower rates. Most observers, including UNESCO, see the language as highly endangered, with children in the Rajshahi area learning the local (Rajshahi) Bangla variety at home and learning standard Bangla in school. Though negative attitudes towards the language, presumably connected to low socio-economic status, were reported by Kim et al (2010) from their  language use, attitude and vitality study, there are also members of the community, working with ELA researcher Ahmed Shamim, who are enthusiastic about maintaining the language.

Kim et al (2010) also suggests that Bangla and Koɖa are “likely to continue to exist side-by-side for some time, with colloquial Bangla slowly becoming the more dominant language.” In addition, only school-going children, who are very few, learn standard Bangla as a medium of education. For these students, their first language Koɖa becomes third in terms of use. Furthermore, among of Kherwarian language communities the Kols [elk] and the Koɖas are on the extreme fringes of Bangladeshi society. Both languages have around the same of number of speakers. An SIL survey found that the Santali, the Mahali, and to some extent, the Mundari communities are well known in Rajshahi, but very few people have heard about the Koɖa.

Neighboring Bengalis recognize Koɖas speakers as Bhuinga, which means “foreigners” in a derogative sense. Some Bengalis recognize Koɖas as a “sub caste” of the Santali community who speak “some dialect Santali tinged with Hindi.” The SIL survey also states that Koɖas are very much overlooked/ignored by the government, the neighboring societies, and even by the NGOs that are ubiquitous in the country. The Christian church, too, appears to have had little contact with or effect on the Koɖa culture, as many of the Koɖa still adhere to the Sonaton religion, and some to Hinduism. The same is true for the Kols, too (Kim et al., 2010, p. 18).

The first known description of Koɖa, done by Sten Konow, appeared in Grierson’s Linguistic Survey of India (1906, vol. IV, henceforth LSI) in its fourth volume dedicated to the description of Munda and Dravidian Languages. The LSI survey (1906) recorded Koɖa speech from different districts of Bengal Presidency of British Inida, translating a story from the Bible. The specimens of Koɖa speech that Konow analyzed for his description of the language were collected from the regions of present-day West Bengal, India. Konow (1906) observed that Koɖas from different district of West Bengal speak different dialects of the language. He suggested that Koɖas originally spoke a dialect of Mundari, and were gradually abandoning their old language for that of their neighbors in the districts in which they were a minority. He commented on the specimens of Koɖa texts forwarded to him thusly: the dialect of Birbhum district “is almost pure Mundari (Konow, 1906, p. 108)”, and one of the specimens forwarded from Bankura district “is written in a very corrupt form of speech, but seems originally to have been a dialect of the same kind as that spoken in Birbhum with a little tinge of Santali (Konow, 1906, p. 108)” and the other “is very corrupt, and it seems to show that the Koɖas of Bankura will soon abandon their old tongue for Bengali (Konow, 1906, p. 114).”

With regard to grammar of Koɖa, Konow (1906) briefly described the phonology and morphology of the language. He stated that the phonetic system of Koɖa is the same as that of Mundari. He presented a brief sketch of the inflectional system of Koɖa in comparison with that of Mundari. He maintained that the inflection of nouns and pronouns, and the conjugation of verbs in Koɖa are the same as those in Mundari respectively. Apparently, there has been no descriptive work on Koɖa since Konow’s brief description of 1906 (Anderson, 2008, p. 195).

SIL International conducted a sociolinguistic survey (Kim et al., 2010) on Kherwarian languages in Rajshahi, a northwestern district of Bangladesh in 2010. Kim et al. (2010) conducted a lexical similarity study, where “lexical similarities within and among Santal, Mahali, Mundari, Koda, and Kol were calculated as a percentage of words from a 307-item list, which resemble each other in sound (Kim et al., 2010, p. 23).” The 307-item list includes the natural phenomena, natural elements, time related expressions, food and vegetables animals, body parts, family relation, house hold items, daily activities, tools, and so on. The SIL survey (2010) states that “[e]ven though linguists have categorized Koɖa as a dialect of Mundari, the two Koɖa villages in our study share only a 61–67% similarity with the Mundari villages of Rajshahi. This could be due to the influence of other languages like Bangla and perhaps even Santali (though to a lesser degree). Thus, it’s possible that the influence of Bangla and Santali have over time decreased the lexical similarity of Koɖa with Mundari” (Kim et al, 2010, p. 28). Based on these findings, Ethnologue lists Koɖa as a language on its own right, exhibiting 49%–55% lexical similarity with Santali, 61%–67% with Mundari, and 57%–60% with Kol [ekl]. The same survey also states that “the Koɖa of Rajshahi perceive themselves to have a uniform speech” and “this is borne out by the result of the lexical similarity study” (Kim et al, 2010, p. 28). The survey does not include any grammatical description of Koɖa.

ELA researcher Ahmed Shamim has been documenting the Koɖa of Rajshahi, Bangladesh, recording speakers who live in Krishnapur, a village in Puthia, a sub-district of Rajshahi. The similarity of lexical items, pronominal forms, and grammatical features like case and verb conjugation suggest that Koɖa spoken in Krishnapur has a diachronic relationship with Koɖa described by Konow (1906) and can be considered the same language.

See the Glottolog entry on Koda

Subject marking, such as -iŋ 1SG, is distributed over negation, TAM makers, as well as the verb. The use of compound verbs has been of particular interest in Munda languages, as they appear to have developed differently in the northern and southern groups (Hook, 1991). Generally, Munda languages such as Mundari show increasingly weak distinctions between noun and verb, which have led to drastically differing analyses of its underlying system of lexical categories (see Evans and Osada 2005, and other papers in the same issue). Given the above usage of compound verbs, it appears that the earlier flexibility is moving in the direction of the stricter Indo-Aryan division between verb and noun.

As part of his larger documentation and description of the Koɖa of Rajshahi, Bangladesh, Ahmed Shamim has been compiling and creating a growing corpus of transcribed and subtitled audio-visual material, as part of a National Science Foundation grant. Shamim’s work uses ELA’s Kratylos system to create a linked online concordance and dictionary, complete with media, that will be of interest to scholars and young, increasingly technologically savvy members of the community alike. The two primary consultants on the project, Shohag Koda and Arun Koda, have a keen interest in finding ways to raise the status of the language through linguistic analysis, literacy, and education.