The Endangered Language Alliance presents the 4th installment of our series Unheard of! featuring the languages of the Himalayas! Located at the intersection of Bhutan, India, Nepal, China and Pakistan, the Himalayas are a region of intense linguistic and cultural diversity. New York is a center of the Himalayan diaspora, adding languages like Sherpa, Tibetan and Gurung to the daily interactional fabric of the city.

We’ve teamed up with Nawang Tsering Gurung, who leads the Himalayan Language and Culture Program in Brooklyn. Nawang is originally from Mustang, Nepal, and he’ll serve as our guide to the region. (Much as he did for the film crew of this National Geographic/PBS documentary, which describes his homeland as a “lost” “Shangri-La.”) Nawang has been working to preserve ancient songs from Mustang, and every weekend he teaches traditional songs, dances, language and religion to children from the local Himalayan community. We’re especially excited that Nawang’s students will be offering a special performance of traditional song and dance in addition to one of New York’s most respected Sherpa singers.

Unheard of! Part 4: The Himalayas

Over the summer, René González Pizarro visited the ELA office in Manhattan. He’s originally from Jokypäjkm (Ascunción Cacalotepec) in the Mixe Region of Oaxaca and currently works at CEDELIO (Centro de Estudios y Desarollo de las Lenguas Indígenas de Oaxaca). During that initial visit ELA recorded a few videos of him speaking about his work, about language endangerment, and about his language, ëyuk, or Mixe.

Well, René was visiting New York again and he stopped by ELA on Wednesday. We had a chance to finish the transcription and translation of one of those videos. Here’s the video (make sure to turn on the closed captioning):

What the English translation doesn’t capture, however, are the poetic qualities of René’s speech. Take the second line, for example: ja’ tu’uk aa mäjtsk aa nkajpxa’any nyaka’any translated as ‘I’m going to share a few words.’ This sentence demonstrates nicely two features that typify eloquent Mixe. (Both of these features are also characteristic of skillful speech across Mesoamerica.)

The first feature is something called difrasismo, exemplified by the phrase tu’uk aa mäjtsk aa, which literally means ‘one mouth, two mouths,’ and which we’ve translated as “a few words.” A difrasismo is a pair of words (typically nouns), which are idiomatically used to express a single idea.

The second feature, (poetic) parallelism, is closely related to difrasismo, and consists of a pair of consecutive words, phrases or clauses that share the same grammatical structure and whose combination has a certain rhetorical effect. In this sentence, parallelism is exemplified by the paired verbs nkajpxa’any, nyaka’any, ‘I’ll speak it, I’ll give it,” translated as “I’ll share.”

So in the second line, there’s already a difrasismo being used in a parallel construction!

Because Mixe is a polysynthetic language, there’s a lot of room for parallelism and difrasismos to be used in complex ways through incorporation and similar phenomena, and René’s introduction is full of such word play. (Not to mention the Mëj Manzana, ‘Big Apple!’)

After a grueling many-month battle with Adobe InDesign, Kalvin Hartwig emerges victorious with his 2014 Anishinaabemowin calendar. The calendar was made at the request of Kalvin’s Sault Ste. Marie Tribe of Chippewa Indians. We hope it serves them well!

For others who may want to learn the days, months and holidays in Anishinaabemowin (also known as Ojibwe), it is available here for download: 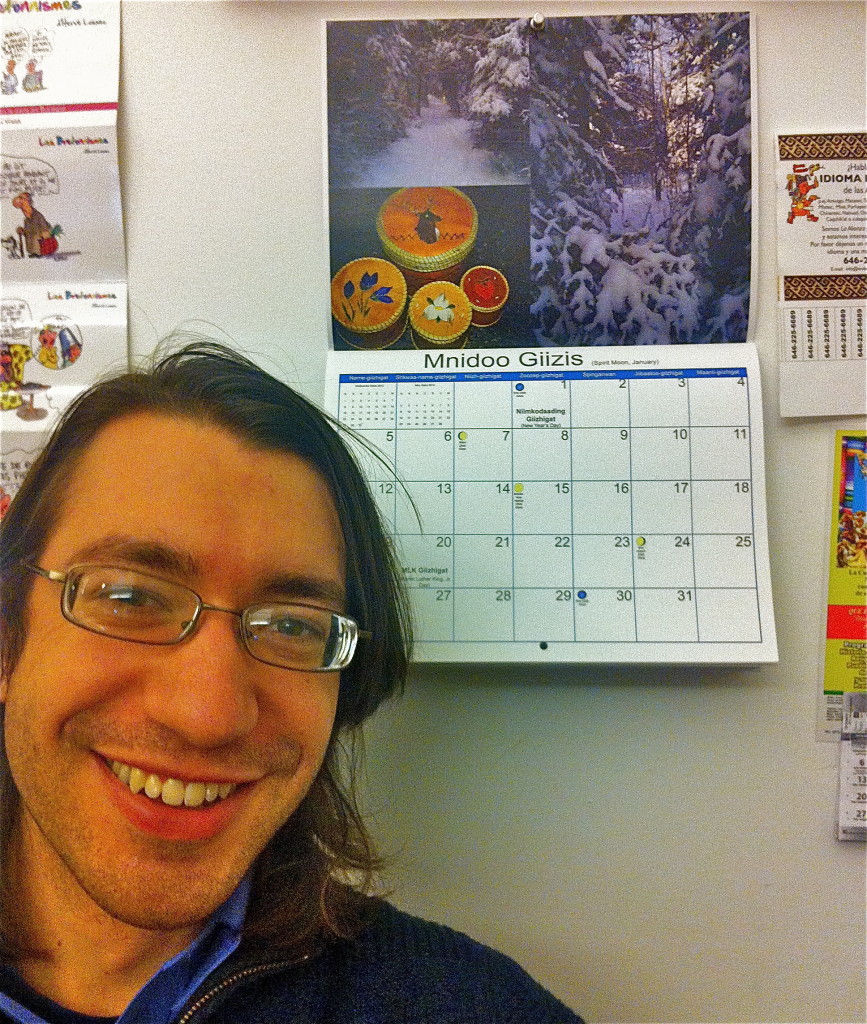 Kalvin Hartwig (Mishka-desi) with his 2014 calendar